Archive for the ‘Holidailies 2016’ Category

I just posted my final photo in the photo a day Flickr group I participated in this year, my fourth with this group. After two years of not missing a day, I missed one this year. I’m rather surprised I didn’t miss more, what with everything that went on to distract me from getting into any sort of routine.

My final image for the year is not something profound or something related to the holiday (we did watch some neighborhood fireworks out the window, but that wouldn’t have made good photos and I was enjoying just watching anyway). Instead, it’s these half price squeaky monkeys I saw when I was down in the city hunting for new nail polish displays for my nail blog. I did not buy them. I need to continue to get better at not buying things. Maybe I will work that into a resolution for 2017 if I decide to do some resolutions. I should probably do some. I need more structure in my life, I think. It’s too easy to put things off, let them pile up. Like the box of sock monkeys in the front hall. They can’t live there forever. 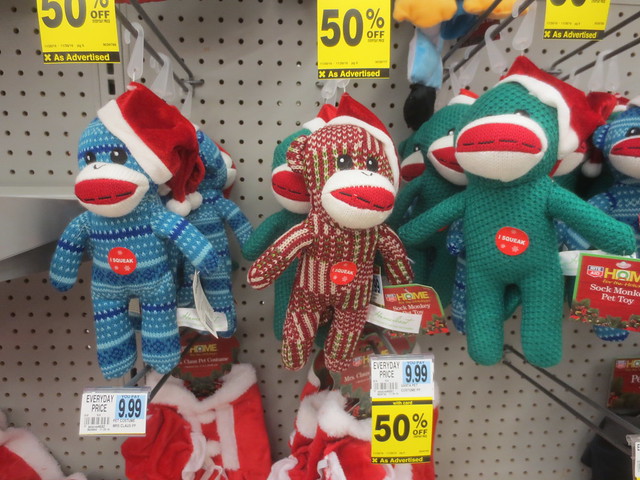 If you’re on Flickr and would like to join me in this daily photo project for the coming year (coming soon Ã¢â¬Â¦ less than two hours to go here in the Pacific time zone), please do: My Daily Photo Diary 2017.

After taking a couple/few years off, I also signed up for a photo a week project for 2017. I think making time, taking time for creative pursuits will be all the more important next year to recharge so as to have energy to resist the normalization of things that are not normal, to use what privilege I have for good, not evil.